A quarter of a century ago, on July 5, 1994, a company, which shared a name with the world’s largest river, was incorporated. It sold books to customers who got to its website through a dial-up modem. It wasn’t the first bookstore to sell online. (Books.com launched in 1992.) But it behaved like a local store, whose shopkeeper knew customers by name – a bell even rang in the company’s Seattle headquarters every time an order was placed.

Amazon’s founder, Jeff Bezos, set his sights on making it an “everything store.” The company would go on to become not just an everything store, but an “everything company.” Today, 25 years later, Amazon has reshaped retailing permanently. It is one of the top three most valuable companies in the world, with a market capitalization hovering around $1 trillion, greater than the GDP of nearly 200 countries.

To put the growing value of this small-scale book seller-turned-e-commerce titan another way: if you had bought $100 worth of its IPO shares in 1997, it would be worth about $120,000 today. 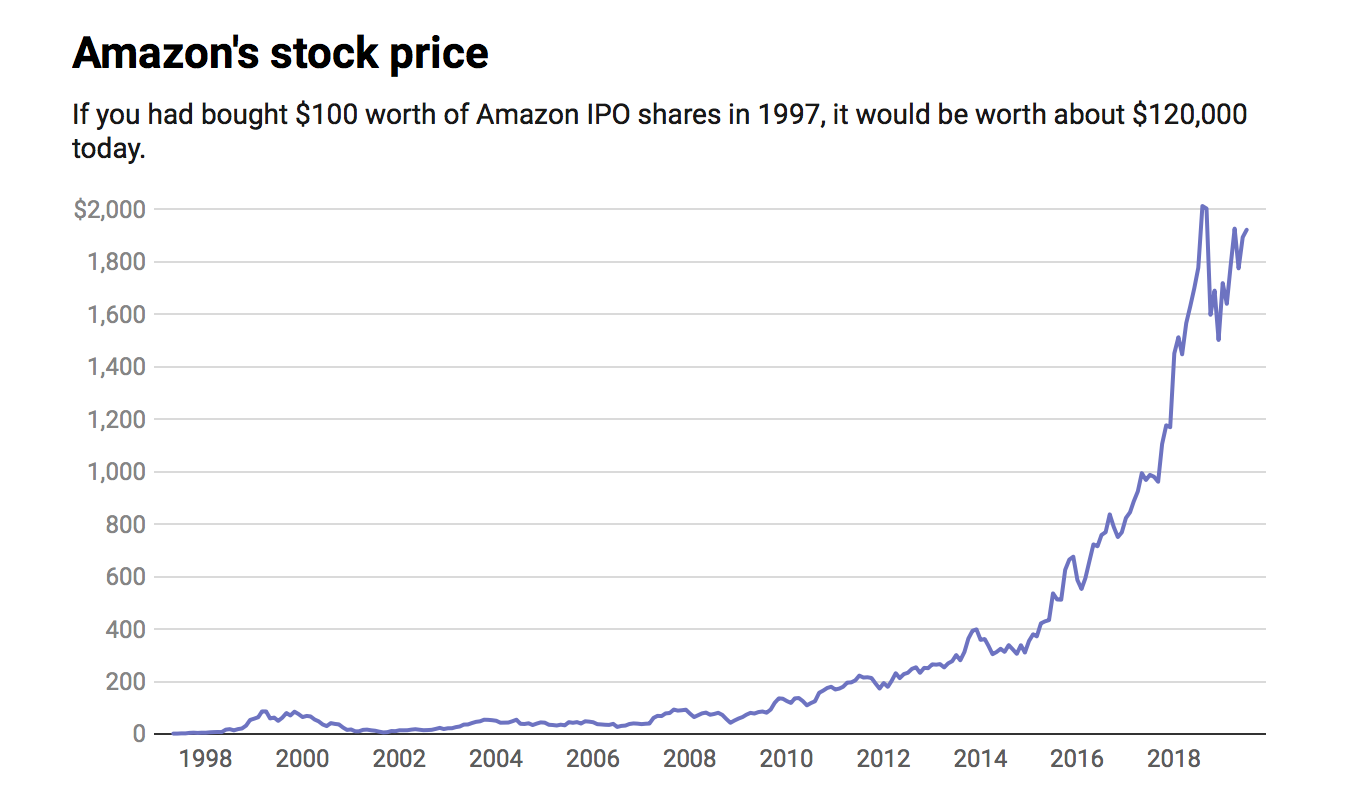 At the center of much of Amazon’s success is its ability to continually take shopping convenience to newer levels. Before 1994, shoppers had to travel to stores to discover and buy things. Shopping used to be work – wandering down multiple aisles in search of a desired item, waiting in long checkout lines. Today, stores try aim meet shoppers where they are –  anytime and through multiple channels and devices.

In addition to Prime shopping, Seatlle-based Amazon has made shopping more convenient through features like one-click ordering; personalized recommendations; package pickup at Amazon hubs and lockers; ordering products with the single touch of a Dash button; and in-home delivery with Amazon Key. Shoppers can also search for and order items through a simple voice command to an Echo or by clicking an Instagram or a Pinterest image. Amazon now even has a cashierless “Go” store in Seattle.

Amazon’s impact is so significant that is has played an undeniable role in the rising closures of brick-and-mortar stores that can’t keep pace with the changes in retail. In the first 15 weeks of 2019 alone, there were about 6,000 store closures in the U.S. overall, higher than the number of closures in all of 2018. All the while, Amazon continue to grow in size, making it the world’s largest retailer, the second ever trillion dollar company (following in the footsteps of Apple), and by far, the largest tech employer in the world. It employs more people than the next five tech companies combined. 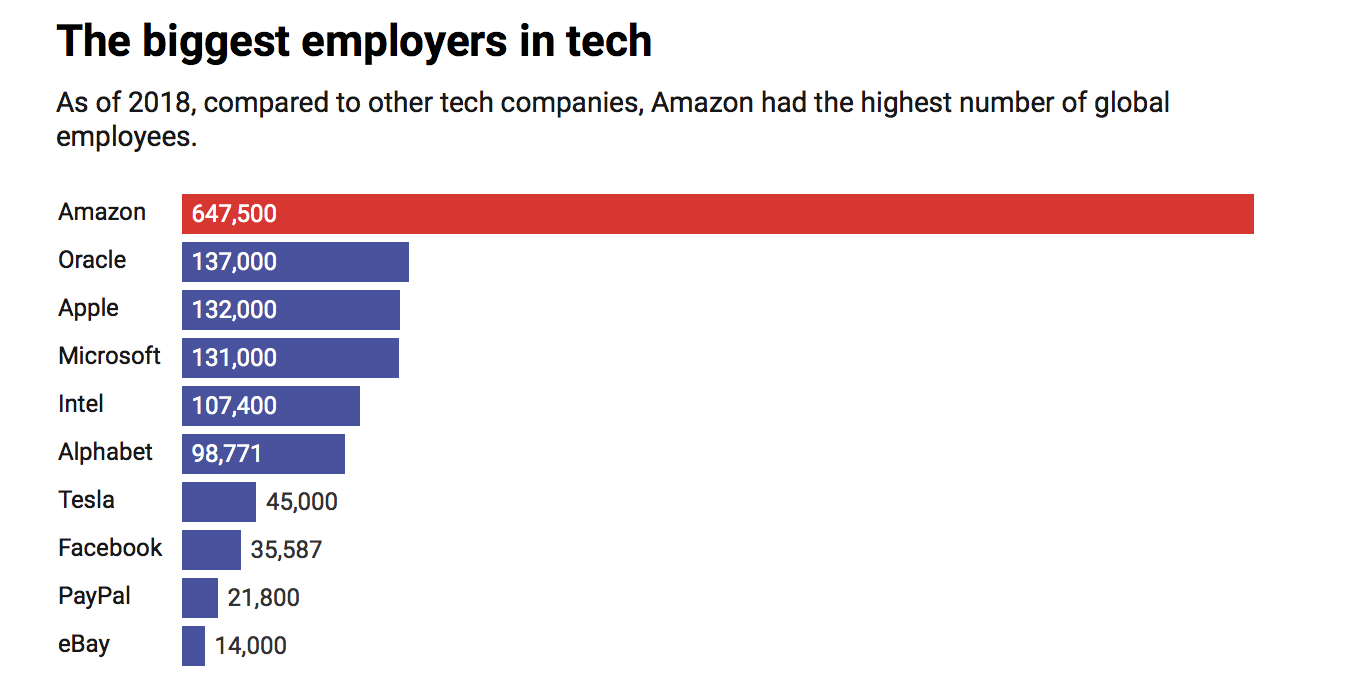 As for what’s in store for Amazon’s future, Bezos has said that Amazon’s efforts focus on preventing it from dying. As he noted at a 2018 all-hands meeting, “Amazon is not too big to fail.” Its future – just like shoppers’ and the society’s future – is inextricably linked to the rise of artificial intelligence. And starting with Alexa, the company’s virtual assistant, Amazon is betting on AI. In fact, Amazon is testing anticipatory shipping, a practice in which it anticipates what shoppers need and mails them the items without shoppers ordering them. Shoppers could keep the items they like and return those they don’t want at no charge.

More immediate questions relate to Amazon’s entry in two stodgy yet critical industries: health care and financial services. Although Amazon has disrupted many industries, these two are heavily regulated industries in which the company hasn’t had much experience.

Amazon is considering becoming a major player in the pharmaceutical and the health insurance markets. In May, it acquired online drugstore PillPack for $1 billion to crack the $500 billion market for prescription drugs and has formed a joint health venture with Berkshire Hathaway and JP Morgan Chase.

Meanwhile, with 310 million customer accounts, Amazon is building a suite of high-tech financial services, such as Amazon Cash, a way to add cash to your online balance, and Amazon Pay, an online payment service. These programs are aimed at developing markets such as India, which has a huge population that does not use banks.

Amazon has reshaped retailing permanently in the last 25 years. In the next 25, it might totally redefine how the world shops.

Venkatesh Shankar is a Professor of Marketing and Director of Research for the Center for Retailing Studies at Texas A&M University. (Edits courtesy of TFL).

On the heels of an array of retail bankruptcy filings in 2016, New York-based designer Bibhu Mohapatra and retailers The Limite ...

Global Brands Group is coming under fire for allegedly failing to make good on its contracts with suppliers. In a statement in ...

Retail was in trouble long before COVID-19 hit. The past five years saw daily reports of store closures and retailer bankrupt ...

As Fashion Brands Continue to Face Racial Discrimination Claims, Here’s a Look at How They Can Address Them

As racial injustice continues to take place across the globe, particularly in the U.S., many fashion brands have scrambled to p ...